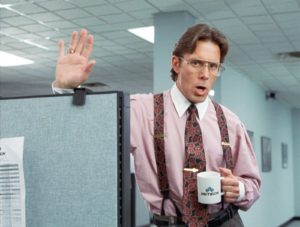 If the “right side” of a logic model is concerned with impact, the left is concerned with efficiency. One way to think about efficiency is to see it as a matter of eliminating waste from a system, whether in the form of wasted materials, money or, perhaps most insidiously, time. There are a number of waste management systems (so to speak) many of which were developed with industrial production and distribution in mind. Toyota, in particular, is legendary for the waste minimization strategies it implements throughout its Toyota Production System (TPS).

Fans of Office Space will be familiar with the notion of TPS reports. What is so great about that scene in Office Space is that it illustrates what happens in an organization when ostensibly sound policies and proceedures are bureaucratized to the point that they become complicit in producing precisely the kind of inefficiency they were designed to minimize. I believe the kids call it irony.  A well-functioning TPS would abhor the notion of TPS reports, much less memoranda referencing TPS reports, much less memoranda referencing cover sheets on TPS reports (If you have not seen Office Space, now would be a good time to remedy that).

The generalized version of the principles upon which TPS is based is sometimes called “lean.” Over time, lean production principles have been adapted for the purposes of software development, which is a rather different endeavor than automobile manufacturing. The “Agile” framework is arguably one such adaptation, and my friend Mark LoParco has recently posted an article on LinkedIn sharing his thoughts on what he calls two “flavors” of Agile (Scrum and Kanban- do you not love these words?) I encourage you to check it out, because not only is he more than a little bit of a genius, he is an awfully good writer to boot.